Last month, scientists and researchers from Michigan Technological University and University of Michigan took advantage of Lake Superior’s notorious fall weather patterns to conduct a multiday field experiment involving a motion capturing jet ski, large waves, and a seasoned US Coast Guard heavy weather surfboat operator. This field test was the final validation of the team’s preliminary work on a “Seaworthiness Through Intelligent Trajectory Control and High-Fidelity Environmental Sensing” project, an experiment designed to investigate one of the foremost limiting factors pertaining to autonomous surface vessel (ASV) use by the United States Navy, among others, being the inability of ASV’s to negotiate and survive large sea states and extreme weather conditions without operator intervention. 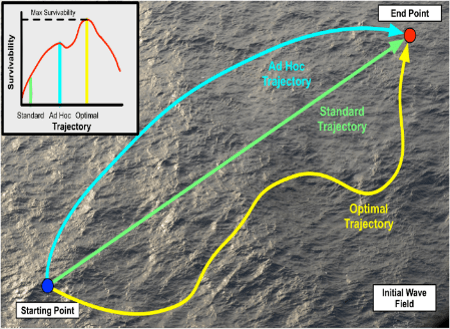 The goal of this experiment was to capture vessel motion data and record an expert navigator’s prescribed maneuvering strategies used to maximize vessel stability in rough seas. Similarly, data was collected representing current autonomous maneuvering strategies for comparison. This research also explored advanced environmental sensors that could be used to develop a next generation autonomous control system capable of making navigation decisions that replicate those used by an experienced navigator.

The test vehicle was piloted by a senior chief boatswain’s mate (BMCS) from the United States Coast Guard around a triangular test course at speeds varying from 5-10 kts (9-19 km/h), corresponding to vessel Froude numbers between 0.5 and 1.0, in a pattern that allowed cross-wave, up-wave, and down-wave runs to be observed. Baseline runs were done implementing straight line (non-optimized) trajectories about the course, followed immediately by an optimized wave dodging technique that is commonly employed by the United States Coast Guard when negotiating challenging sea conditions in order to maximize crew and vessel survival. 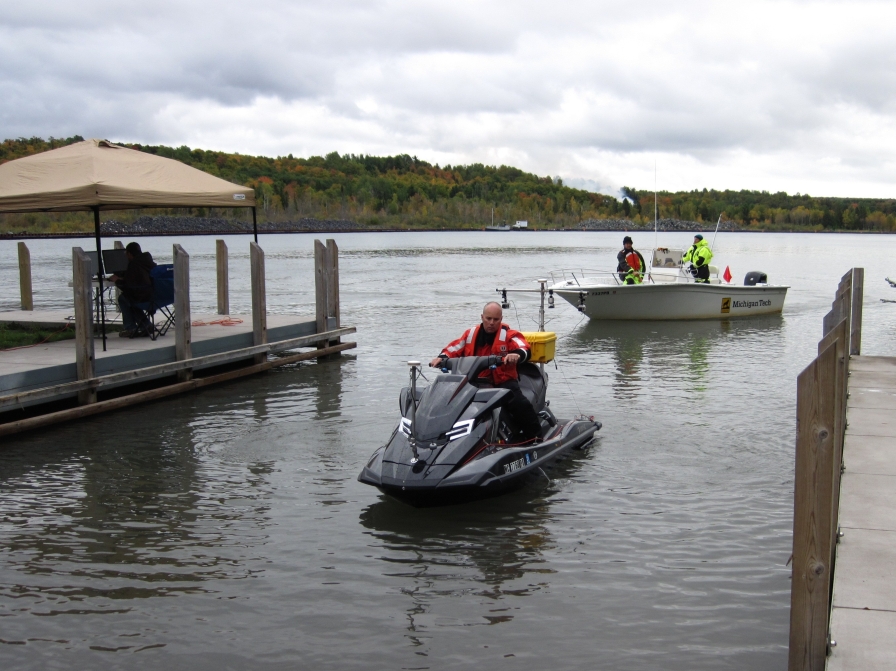 Preliminary observations based on the data collected from this experiment shed new light on vessel control strategies used by the United States Coast Guard to maximize vessel environmental survivability in high surf and extreme weather navigation scenarios. Wave dodging optimized contact between the vessel hull and water to maintain control and reduce slam. This was accomplished by allowing the vessel to roll in order to minimize vessel pitch when encountering a significant wave front. The result of this strategy reduced accelerations in the heave and surge directions and also prevents loss of propulsion and loss of control. These findings have implications for future vessel design and next generation autonomous control systems.

Data collected from the radar and LIDAR sensors on shore demonstrated the ability to remotely gather wave data in real time, which might be useful for advanced sensor suites to guide autonomous surface vessels through large seas. Other sensing technologies including those onboard the instrumented vessel will be the topic of additional research building on the findings of this experiment in order to develop next generation autonomous controls for ASV’s.

This field experiment was the first test of its kind to be conducted within the waters of Michigan’s newly established Marine Autonomy Research Site, which was officially launched at a ceremony held in Houghton, Michigan on August 10, 2018. Testing was supported by the faculty and staff of the Great Lakes Research Center on Michigan Tech’s main campus in Houghton Michigan. Personnel from the United States Coast Guard Station Portage were instrumental in supporting this test by providing subject matter expertise as well as safety planning guidance. Total costs for this test effort were surprisingly low, demonstrating a cost effective model for future testing to be carried out in the Marine Autonomy Research Site to advance knowledge and application of autonomous marine systems.

The team is seeking additional funding to allow the researchers to continue their high impact work in this topic area and develop a next generation approach to autonomous vessel navigation in large sea states through intelligent trajectory control using advanced real time environmental sensing. Applications for related discoveries are broadly applicable to all autonomous surface vehicles operating around the globe today and have major relevance to defense, commercial, and scientific interests.

For more information on this research or to learn more about the Marine Autonomy Research Site, please contact the author, Travis White (tmwhite@mtu.edu).