Autonomous Surface Vessels and Vehicles (ASVs) and Autonomous Underwater Vehicles (AUVs) advanced technology has matured in recent years and has become a readily available “off-the-shelf” tool. The number of products and types of vehicles under development continues to grow. Similar to the automotive and trucking industry’s land-based autonomous vehicles and the aviation industry’s aerial drones, much testing is needed to verify associated risks and compliance with real-world conditions, including the interaction with fully crewed vessels, recreational vessels, compliance with existing maritime regulations and the amount of oversight and control needed for safe and efficient operation. For these reasons, the Smart Ships Coalition announced a Great Lakes test bed area open to all companies, research institutions, government agencies and others wishing to test autonomous surface and sub-surface vehicles and related technologies.

In the near term, the test area will be restricted to small vehicles (<10 meters) with an expected focus on research and survey vessels. These vessels represent those with the greatest near-term commercial potential and pose significantly less risk than larger vessels. Beginning with these types of vessels will enable industry, regulators and partners to test operation, safety and other factors on navigable waters of the United States in a controlled environment where they can interact with commercial and recreational vessels in a limited capacity. As such, the assumption is that their operation will still be subject to US Coast Guard (USCG) regulations that involve the state of maneuverability, commonly accepted Rules of the Road and other requirements. Globally, there have been examples where commercial traffic was requested to deviate from their intended course due to autonomous vessel operations, so testing and oversight of the type proposed will help to avoid future incidents that could pose a threat to maritime safety and possible delays resulting in negative economic impacts.

The area in and adjacent to the Keweenaw Peninsula Waterway has been identified as an ideal location for this test area for a number of reasons that make it uniquely suited for this this designation. The MARS test bed will be centered on and extends within a 30-mile radius of Michigan Tech’s, Houghton/Hancock, Michigan, main campus. This region is currently served by the University’s high accuracy, real-time, global positioning system (GPS) survey system. As such, it includes the Keweenaw Peninsula’s Portage Canal, Portage Lake Canal, Portage River, Lily Pond, Torch Lake, and Portage Lake. It also includes significant Lake Superior shoreline and coastal waters along the Keweenaw Peninsula’s west and east coasts such as Keweenaw Bay. The Great Lakes Research Center at Michigan Tech is uniquely positioned to support both the Smart Ships Coalition and the establishment of an autonomous vessel test bed facility, the Marine Autonomy Research Site (MARS). 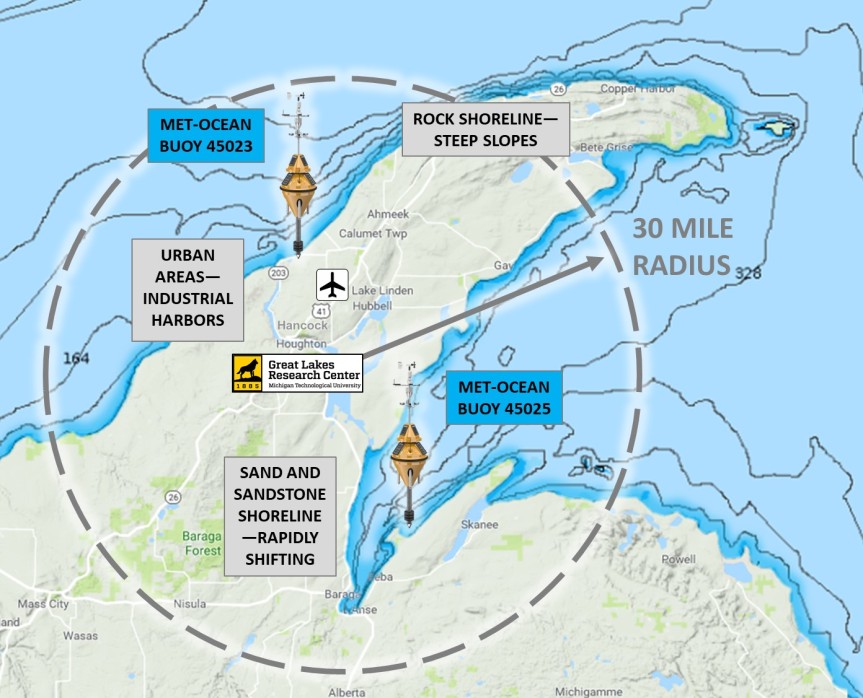 Working with multisector partners including OGL and the Great Lakes-St. Lawrence Governors and Premiers (GSGP) two resolutions, or Memorandums of Understanding (MOUs), have been executed to establish the Smart Ships Coalition. In October of 2017, GSGP signed a resolution to officially recognize the Marine Autonomy Coalition (founding name for today’s Smart Ships Coalition), and in November 2017, the Norwegian Forum for Autonomous Ships entered into a MOU with Michigan governor Rick Snyder and the general manager of NFAS, Ornulf Jan Rodseth, for “exchange of information and non-competitive cooperation on smart ship technology and autonomous ships.” In January, 2018, the USCG was briefed on the concept of operations for a Great Lakes autonomous vessel testbed and received a draft plan from OGL and the GLRC detailing the potential test area, the types of testing it could support, and requirements for operation and risk mitigation.

On August 10th, 2018, the Smart Ships Coalition publicly launched, with 18 confirmed members and is still growing. During this ceremony, the Marine Autonomy Research Site (MARS) was officially recognized by the offices of Michigan’s Governor, Rick Snyder, and the Director for the Michigan Office of the Great Lakes, Jon Allan, who provided support for the denotation of the Marine Autonomy Research Site by Michigan Technological University, centered at the Great Lakes Research Center.

Next Steps for the Marine Autonomy Research Site

The application process assumes roles and responsibilities and possibly a supporting budget. For discussion purposes, it is assumed that State of Michigan, Michigan Tech (Great Lakes Research Center), and the USCG would play lead roles in the application process and at least one of these entities would be the designated “test bed overseer” that manages the application and approval process. Specific and mutually agreed upon roles will be defined at a later date after discussion involving all parties and the Smart Ships Coalition Steering Group.

Autonomous vessel testing will depend heavily on at least two factors: proper monitoring and maritime safety. Safety will rely heavily on the boating laws of the State of Michigan enforced by officers of the Law Enforcement Division of the Michigan Department of Natural Resources, County Sheriff’s Department, USCG, and any other authorized law enforcement officer. As always, they have the right to stop and board vessels to check for compliance with federal and state laws and the USCG has enforcement authority on federally controlled waters.

Risk mitigation will be conducted either after initial consultation with the USCG, or once Michigan Tech (or some agreed upon oversight entity) gains enough experience, or possesses enough knowledge to limit / prevent high risk scenarios, while testing autonomous vessels. At a minimum, the vessel sponsor must be able to demonstrate that they have a clear understanding of the USCG watercraft Rules of the Road and applicable federal and state regulations, especially those pertaining to boating safety.